She looked at nice young men as if she could smell their stupidity. ― Flannery O&#39;Connor > Popular Quotes 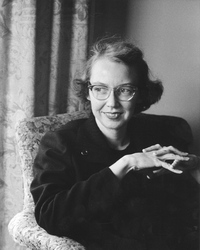 She looked at nice young men as if she could smell their stupidity. ― Flannery O'Connor

Flannery O'Connor was born in Savannah, Georgia, in 1925. When she died at the age of thirty-nine, America lost one of its most gifted writers at the height of her powers. O’Connor wrote two novels, Wise Blood (1952) and The Violent Bear It Away (1960), and two story collections, A Good Man Is Hard to Find (1955) and Everything That Rises Must Converge (1964). Her Complete Stories, published posthumously in 1972, won the National Book Award that year, and in a 2009 online poll it was voted as the best book to have won the award in the contest’s 60-year history. Her essays were published in Mystery and Manners (1969) and her letters in The Habit of Being (1979). In 1988 the Library of America published her Collected Works; she was the first
추천 0